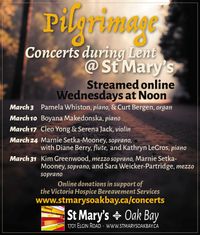 on the 'hat performs Pilgrimage Concert during Lent

In this 4th concert of the Lenten series, the pieces chosen by Diane, Kathryn, and Marnie are inspired by this reflective time of year, as we move from Winter to Spring, ending with the promise of Spring. It is an eclectic mix of musical styles, from the Bach/Gounod “Ave Maria” to three versions of “Over the Rainbow” and the premiere of a piece written for this concert by flutist, Diane Berry entitled “Winter’s End”. The concert will also include music by local composer Leila Lustig whose musical works were to be celebrated last Spring at the Canada Music Centre in Vancouver. As with so many things in 2020, the concert was cancelled but Diane, Kathryn and Marnie will bring you three of the pieces that were part of that original program. Online donations in support of Victoria Hospice Foundation Bereavement Services.